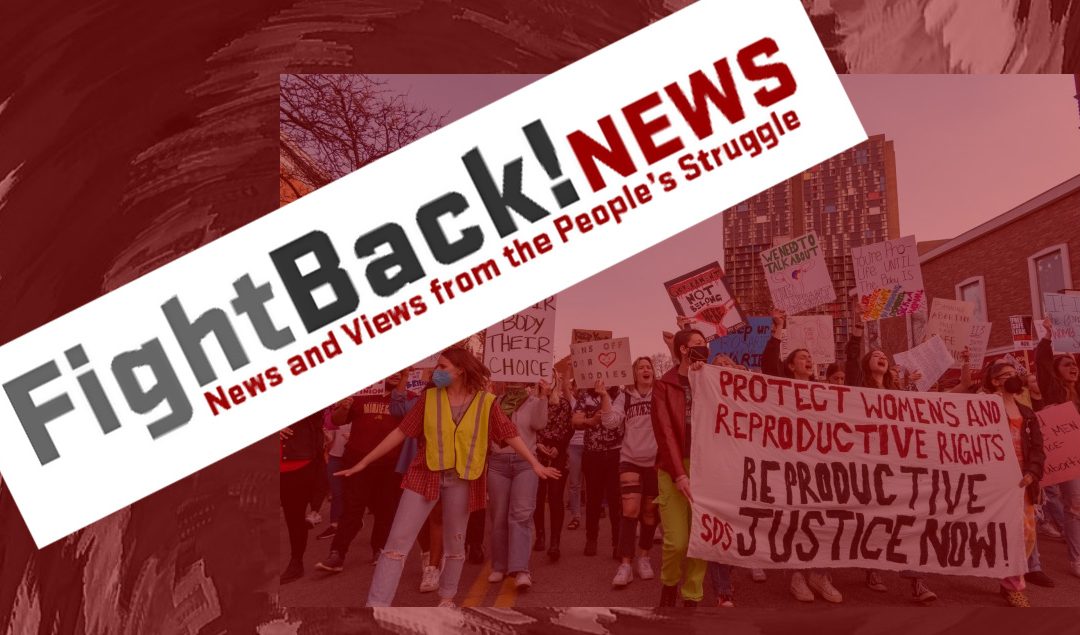 Book review of My Whirlwind Lives: A Chronicle of Decades of Resistance and Struggle

By the staff at FightBack! News

Minneapolis, MN – Dee Knight’s My Whirlwind Lives is both a memoir and manifesto – chronicling more than five decades of anti-imperialist resistance and revolutionary engagement. “Being a revolutionary is like being a midwife for the future,” he writes. “While there is blood and pain, its essence is hope and excitement for a future we can begin to see ahead of us.”

Knight’s first “whirlwind” started in the 1960s: “threats of nuclear catastrophe, rednecks with dogs terrorizing freedom marchers, Vietnamese children fleeing from napalm flame.” His memoir is a response to current stormy events and trends that are changing history. Knight places them in the context of “decades of turmoil in the U.S. and overseas, and decades of movement building against war, injustice and destruction of the planet,” as Medea Benjamin says. It tells of witnessing and supporting revolutions in Portugal and Nicaragua and building a socialist movement at home.

Gerry Condon of Veterans For Peace, Knight’s long-time comrade in resistance, says the story “shares much with that of thousands of young people whose lives and world views changed when they were pushed to participate in unjust U.S. wars.” In his last year of high school in small-town eastern Oregon, Knight supported far-rightist Barry Goldwater for president over the “peace candidate” Lyndon Johnson. But it didn’t take long for the struggles of the mid-sixties to change his mind, and his life.

Knight writes of meeting Clarence Thomas, the well-known leader of the International Longshore Workers Union, when he was a student in 1966 at San Francisco State College. Thomas was part of daily campus rallies led by the Black Students Union, denouncing the student draft deferment as a class and race inequality. Knight later met Walter Collins, a founding member of the Student National Coordinating Committee, who fought intense repression for his refusal to be drafted to go to Vietnam. Both Thomas and Collins helped mobilize a generation of young people to resist, in the streets. They were good teachers for a naïve but fast-learning young person whose life in resistance was just beginning.

As Knight tells it, the story of Clarence Thomas and the San Francisco longshore workers was an object lesson of the huge impact – and revolutionary potential – of militant trade unionists. “In 1984 they shut down the port of San Francisco rather than unload cargo from apartheid South Africa,” and “In 2011 ILWU joined hands with the Occupy movement to shut down the West Coast. Nearly every May Day the San Francisco dock workers take the day off to march. It recalls the 1934 San Francisco General Strike, when ILWU shut down the ports on the west coast for 83 days.” “This historic action, along with the Teamsters’ strike in Minneapolis, and others in Ohio and Michigan, nearly all led by communists or socialists, forged the Congress of Industrial Organizations – the CIO.”

“This can happen again,” Knight writes, “and it can spread like wildfire.” This is an example of how the memoir is also a manifesto – a kind of polemic for revolutionary optimism. He relates the surge in teacher strikes that began in 2018 and has spread across the country – with and without official union backing, and the struggles of nurses, fast food and retail workers that have become unstoppable. He adds in the prison strikes that emerged in 2018, which in at least one case commemorated the historic Attica rebellion of 1971 and the heroic leadership of George Jackson. He also pays tribute to iconic resistance fighters Mumia Abu Jamal and Leonard Peltier.

Life in exile, and the fight for amnesty

Knight’s resistance took him to exile in Canada after “the battle of Chicago” in 1968. The first third of the book tells that story: how life outside the U.S. opened new possibilities – a chance, among other things, to learn about Marxism and socialism. The memoir tells how Knight became a leading organizer for amnesty for war resisters, in alliance with anti-war Vietnam veterans. That campaign culminated at the 1976 Democratic convention in New York, with a Gold Star Mother nominating a war resister for vice president, seconded by disabled Vietnam veteran Ron Kovic. This electrifying display of solidarity became part of a movie, Born on the Fourth of July. These efforts didn’t win the complete amnesty for draft resisters, but they did force a broad “pardon” from Jimmy Carter in his first act as president in January 1977. Knight tells how they continued organizing in defense of veterans with “less than honorable” discharges for years after. The point was to justify all types of resistance, in and out of the military: “Amnesty for the future – not just the past!”

After returning from Canada, Knight went to Portugal to witness the Carnation Revolution of 1974-75, then to Sandinista Nicaragua for three years in the 1980s, living the realities of revolution in a poor Central American country, and opposing Ronald Reagan’s illegal efforts to crush it. This part of the story includes a defense of the Nicaraguan revolution against continued U.S. efforts to strangle it.

In the wake of the September 11, 2001 attack on the World Trade Center, when President George W. Bush declared “endless war” against terrorists, Knight helped organize giant mass protests, so big a New York Times report said the anti-war movement was a “new super-power.” Knight then takes us through the mass popular reactions to the crash of 2008 – organizing a large “Bloombergville” camp-in near New York’s City Hall in a precursor to Occupy Wall Street. Closer to the present, he contrasts the massive Black Lives Matter protests of 2020 with the fake insurrection of January 6. He says the 2020 uprisings “hark back to the giant civil rights and anti-war protests of decades past, and are a harbinger of real change on the horizon.”

A “right turn” or a polemic for struggle?

In the context of its roots in the rebellious storms of the 1960s, seventies, and even the present, it’s a bit surprising to see Knight’s memoir turn to focus on Bernie Sanders and AOC’s “Socialism and the Green New Deal.” Knight gives credit to Sanders for popularizing socialism and calling for “a political revolution.” But he then goes on to explain that “we should be realistic. Such a revolution would also have to transform the old state apparatus – the military, cops and courts. We would need to take over the ‘commanding heights’ of the economy… to expropriate the banks, insurance, energy and rail transport industries, as well as the military-industrial complex and big pharma.”

Knight admits that “getting all this might take a miracle,” but then paints a picture of how it can happen: “Strikes and sit-ins by young people will spread and intensify. Workers can mobilize on a large scale, shutting down or taking over work places, ports, and entire cities. They can join with farmers, unemployed people and youth – everyone – in massive marches to demand change. Soldiers can shut down military bases across the country and around the world. That would have some impact!”

So in fact this memoir is indeed a manifesto – an impassioned argument that we do have what it takes to bring about the change we need. Knight makes it seem both exciting and possible. That’s good news.

Excerpts of My Whirlwind Lives can be found at DeeKnight.blog. It’s due for release from Guernica World Editions on June 1. Advance copies are available at Mayday Books in Minneapolis and online from 1804Books in New York.