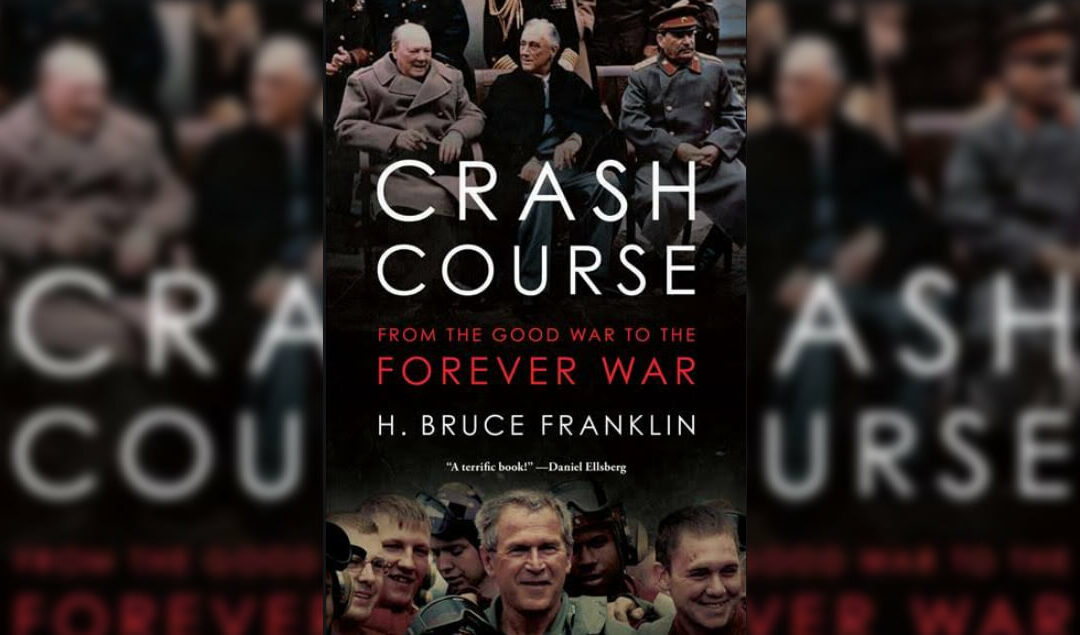 I may write about many different books here, but the top two for now are Crash Course: from the Good War to the Forever War, by H. Bruce Franklin, and Turn the Guns Around: Mutinies, Soldier Revolts and Revolutions,?by my friend John Catalinotto, an organizer of the American Servicemen’s Union. Reviews of both follow.

Crash Course: from the Good War to the Forever War, by H. Bruce Franklin, just published (2018) by Rutgers University Press. Franklin taught American Studies at Rutgers/Newark for about 4 decades, focusing a lot on the period of the U.S. war against Vietnam. I love his book, which is also a memoir (like mine), but covering a longer period — from pre-WW2 to the early 2000s. First a super-patriot and military fly boy, he learned first hand about official U.S. lies regarding war and peace, and was a front-line anti-war fighter, including a stint in France where he and his wife Jane helped U.S. military deserters from bases in Germany, alongside the legendary Max Watts. I have much to say about this excellent and important book, and expect to return to it again and again.

There is a wealth of analytical gold in Franklin’s book: he demolishes the “cultural fantasy” that “blames the anti-war movement for forcing the military to ‘fight with one arm tied behind its back’,” and also exposes the Reaganite campaign to “rewrite and reimage the history of both the war and the antiwar movement” — transforming a criminal war into a “Noble Cause” that was “betrayed by privileged college students, long-hair drugged-up hippies, the liberal media, pinko college professors, and Jane Fonda.” He tackles “the POW/MIA myth and the myth of the spat-upon veteran, and analyzes a series of Rambo movies and others that were “colonizing American culture in the 1980s” while Washington was “busy waging covert and proxy wars, as in Nicaragua and El Salvador, and quick-in-and-out wars, as in Grenada and Panama.”

Franklin’s discussion of the U.S. bombing of Hiroshima and Nagasaki at the end of WW2 is enormously revealing on numerous levels, not only the obvious official moral depravity and utter dishonesty of it, but also providing the details of how the Japanese leadership was more convinced to surrender when they faced an overwhelming threat of defeat from a massive Soviet buildup on the Manchurian border.

The detailed exposure of the U.S. “police action” in Korea in the early 1950s gives Franklin’s book special value today, when people need to know what has been hidden about that war for so long in order understand possibilities for peace.

Franklin’s unique perspective as former Air Force “fly boy” gives great credibility to his subsequent exposure of the use of napalm in Japan, Korea and Vietnam. While he doesn’t say this, it must also have made the sailors on the USS Constellation, Kitty Hawk, etc., listen even more intently as he encouraged their enthusiastic rebellion and refusal to be part of Nixon’s 1972 “Christmas bombing” raids against North Vietnam before the January 1973 peace agreement was signed.

Franklin was “really there” for all these historical events, giving his book compelling authority, while reading not just as a memoir, but like an adventure thriller. I can’t recommend it highly enough.