“Democracy” as a Weapon 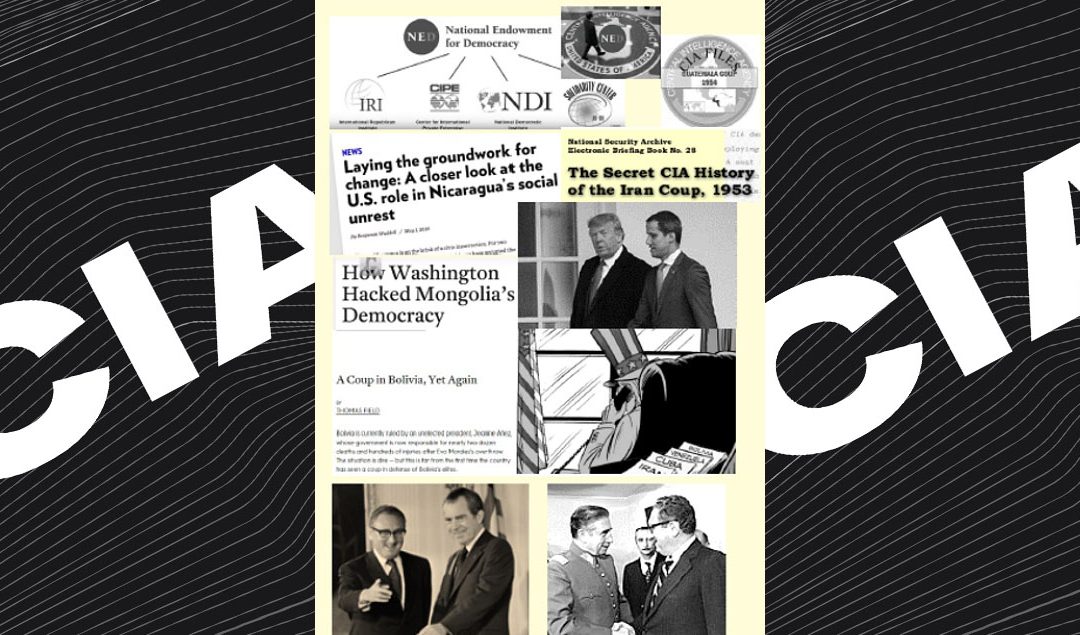 Reprinted from the LA Progressive

U.S. media and politicians use “democracy” as cover for non-stop efforts to discredit, disrupt and overthrow popular revolutions everywhere. In 2018 and 2019, the 45th U.S. president (who lost the popular vote in 2016) “selected” a puppet president to replace Venezuela’s democratically elected socialist leader. (Now Biden has invited this puppet to his “Summit for Democracy”!) Everything about the many attempts to topple Venezuela’s socialist leaders – first Chavez in 2002 and more recently Maduro – points to a main interest in Venezuela’s vast oil reserves, the largest in the world.

For the same reason, the U.S. toppled the democratically elected President Mosaddegh of Iran in 1953, ushering in 26 years of dictatorship under the Shah. In 1954, when the Dulles brothers (Secretary of State John Foster and CIA Director Allen) ousted democratically elected President Arbenz of Guatemala, these Wall Street lawyers were acting on behalf of their major client. The interests of United Fruit were being threatened by land reform, improved wages and working conditions ordered by Arbenz. In that same year Dulles declared the U.S. would not “stand by and let the Vietnamese people vote for communism,” especially after three years of “police action” had “saved” half of Korea.

No matter how nice the trappings of popular participation might appear, the capitalist political system – in all its various forms and manifestations in different countries – is designed to maintain and protect a system that guarantees the dominance of a minority of big property holders over the rest of the population. The capitalist class controls all the levers of economic activity, and also dominates a state apparatus whose fundamental purpose is to perpetuate capitalist rule. So if a popular revolution happens, it is essential that the new power reverse this process in order to prevent counterrevolution. In the case of Cuba, that’s the reason there was an exodus of thousands of landlords and mafiosos after 1959.

China’s relatively new policy of “reform and opening up” proposes that under some circumstances a socialist state can make room for capitalists in the otherwise centralized development process. But in this process the role of the centralized state apparatus remains essential. These days China’s system and leadership are under constant criticism and attack for not transitioning to a western style electoral system. There’s a non-stop western campaign for “democracy and human rights” on behalf of anti-socialist elements trying for a comeback or takeover. But more than 90% of the Chinese people like their government, and “rate it as more capable and effective than ever before,” according to Harvard University’s Ash Center for Democratic Governance and Innovation. I suspect the majority of people are better off in China than in the U.S., and the government is responsive to their interests. It has taken a non-stop campaign of fake news to mobilize support in the U.S. for a cold war against China.

The western media campaigns against “authoritarianism” never acknowledge the constant violations of human rights in the U.S., brutal suppression of voting rights for large portions of the population, or the repeated blatant efforts to stage coups against democratically elected leaders abroad. There is seldom any acknowledgement that the current “democratic” system in the United States was built on a foundation of slavery and genocide. Jim Crow laws may be part of the past, but their vestiges remain, not only in the system of mass incarceration, but in constant efforts to suppress voting rights for people of color. The result is that systemic racism is enshrined in Washington, DC, and in state capitals and city halls across the USA.

While the official media criticize “violations of democratic rights” in China, Venezuela, Nicaragua, Bolivia, etc., etc. – essentially any country that does not conform to the “Washington consensus” – the U.S. system has elaborate guarantees to ensure that big money rules. In the midst of the 2020 surge of popular energy to overturn the rule of Trump and the Republican Party, I could never forget that the entire electoral apparatus, plus the courts, are completely rigged to protect and preserve the capitalist system. The constant campaign to limit the right of the poor and people of color to vote is often called “preventing electoral fraud.” Meanwhile genuinely fraudulent elections secured the victory of George W. Bush in both 2000 and 2004. And in 2016, the results in Florida, Georgia, and Ohio were subject to question – at least. The infamous Electoral College is the linchpin of a constitutional arrangement that has guaranteed disproportionate electoral representation to states with smaller, more rural populations over those with large cities. This distribution also tends to favor former slave states. So the heritage of slavery lives on in a quasi-democratic system that disenfranchises millions.

The “winner-take-all” system discourages competition with the two official parties, both of which are funded lavishly by the rich and by large corporations. Ever since the 2010 Citizens United decision by the Supreme Court, corporations have “free speech” rights (as “persons”), so they can contribute whatever amount they want to political campaigns with no obligation to report such contributions. Big money monopolizes the electoral system in the U.S., frustrating the endless efforts of progressives by forcing voters to elect “the lesser of two evils.” One result is perennial low turnouts on election day.

Over the decades socialists have made valiant efforts to take power through elections, and then introduce socialism using the existing system. It’s like fool’s gold. First you grasp it, then you discover it’s not what it seems. For example, in England after World War 2, the Labour Party won the elections. Instead of introducing socialism they basically ran the capitalist state for the bankers. They proposed votes in Parliament on some socialist measures, and even got some progressive things done, like establishing the national health care system. But socialism never took root in England. The same was true in other European countries at various times in the 20th century.

Chile under Socialist President Salvador Allende (1971-73) provides another example. Allende’s Popular Unity government implemented many socialist measures, and had the strong support of the people. But Nixon, Kissinger and the CIA worked hand-in-glove with International Telephone and Telegraph (ITT) and the big U.S. copper companies there, as well as rightists in the national assembly, and their partners in the armed forces. They waged a destabilization campaign to cause economic and political chaos, and at a pre-appointed moment the military stepped in with a heavy hand. In the end Allende was dead and all his close associates and political allies were jailed, killed or exiled; a brutal dictatorship took over and ruled for two decades.

These situations expose the vulnerabilities of western style electoral “democracy.” During the Russian Revolution the Bolsheviks called for workers’ councils – the soviets – to seize power. They abolished the old state structure that had served the czars and the capitalists, and built a new state. The workers and peasants who made up the rank-and-file in the armed forces went on strike and then deserted, weapons in hand. They ultimately left the old military an empty shell, except for elite units that survived and mobilized against the new state. This counterrevolutionary mobilization failed because the new revolutionary leadership created a people’s army to defend the new state. The police were replaced with a new police system dedicated to the new order. The same happened to the court system, which had been used to repress and imprison millions of poor people in Russia and its dependent nationalities. Old Russia had been a “prison house of nations,” because the system of repression fell most heavily on people of Russia’s many oppressed nationalities – not so different from the U.S. today.

After the revolution the new state took a new name: no longer simply Russia, but instead a Union of Soviet Socialist Republics. “Soviet” is the Russian word for council, in this case workers’ council. There were workers’ councils and peasants’ councils everywhere the revolution took place. These councils replaced the old decision-making bodies, which were rotten and corrupt – pretty much like the Congress, state assemblies and city councils in the USA. The “representatives” in these bodies were most often pre-selected by the local or national elite, and then “elected” in a system that prevented the majority from proposing other representatives. This made it impossible for large numbers of people to vote. They called it democracy, but it was an elaborate system designed to prevent real democracy – much like here in the USA today.

In 2017 the Bolivarian government Venezuela, faced with constant U.S.-backed counterrevolutionary efforts and threats of military invasion, replaced the old national assembly with a Constituent Assembly that is based on people’s councils which have sprung up across the country. While U.S. economic sanctions and a well-organized campaign of capital flight has caused skyrocketing inflation, so the Venezuelan currency is essentially worthless, the government has responded with a series of measures. It provides guaranteed food deliveries to the population through the people’s councils, and has instituted an electronic currency to maintain at least part of its oil business, with help from Russia and China. The Bolivarian government has moved to integrate representation of the people’s councils with the military – making it a people’s army, ready for rapid mass popular mobilization for national defense when necessary. This more fundamental form of popular democracy has frustrated several U.S.-backed attempted coups.

In China, the revolution itself was fundamentally democratic – abolishing feudalistic hierarchy and privilege, equalizing gender differences, and enabling poor workers and farmers to be involved in national administration. “Western scholars use their democratic standards, such as a multi-party system, universal suffrage, and checks and balances, to evaluate Chinese political development,… and conclude that Chinese reform is more economic than political. This is an unnecessary bias and misunderstanding,” writes Yu Keping, director of the China Center for Comparative Politics and Economics.

Comparisons of versions of democracy in various parts of the world are often highly subjective, but when evaluated objectively they don’t always show the U.S. version as the best. In the current tense global atmosphere, official U.S. discourse appears to be reverting to past practice, using its highly selective concept of “democracy” as a bludgeon, and an excuse for military aggression. Veterans For Peace recently called on the U.S. government to “reject escalation towards global conflict and instead pursue peace, non-intervention, and cooperation with China and the rest of the world.”