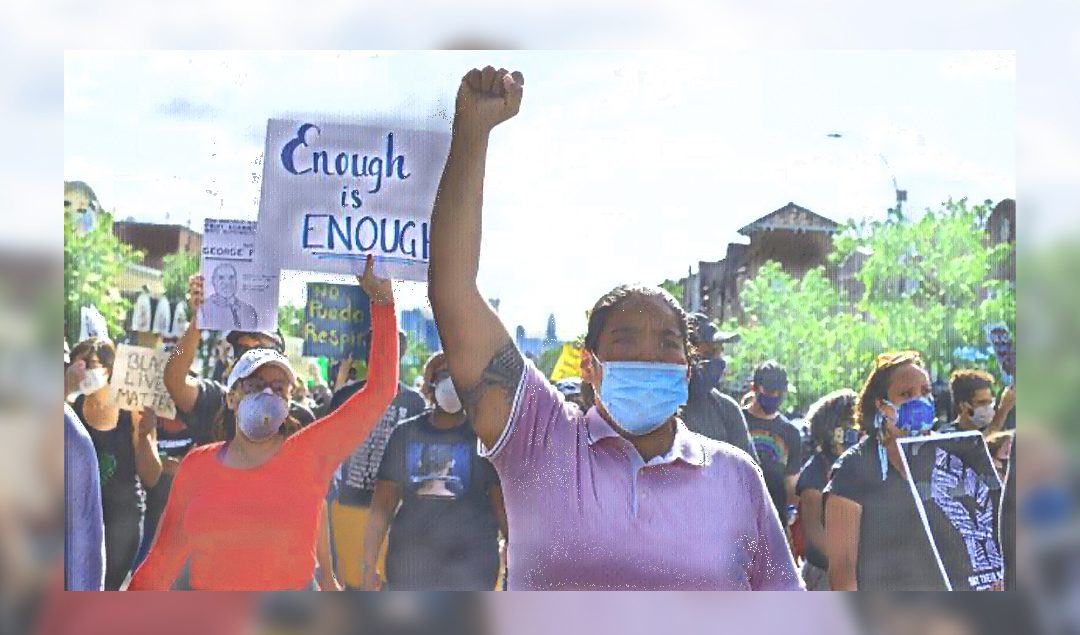 by Dee Knight. Reprinted from the DSA’s Democratic Left (September 21, 2020)

No matter who wins in November, we need to hit the ground running. That was the message of Keeanga-Yamahtta Taylor, the keynote speaker at NYC DSA’s August convention. And when Taylor—a Princeton professor and author of From #Black Lives Matter to Black Liberation—said “ground,” she meant it. As in, the streets, by protesting continued police murders, pursuing our Defund campaign, and linking those efforts with the rest of our program.

Moreover, we must heed Senator Bernie Sanders’s recent call to differentiate our socialism from  Donald Trump’s red-baiting of the Democratic Party’s ticket. Most voters can agree with the common-sense goals in Bernie’s 21st Century Economic Bill of Rights, proposing that all U.S. residents are entitled to the following:

Public opinion is shifting toward these demands and more, as seen in the battles to save the U.S. Postal Service and preserve the safety of students and teachers in the midst of school re-openings. Teachers are striking in many cities, often with DSA support. Our alliance with the electrical workers’ union (UE) through the Emergency Workplace Organizing Committee is producing results.

Prospects appear good that Donald Trump will be defeated in November, but even with a change in the White House and power shifts in both the House and Senate, the country – especially the working class – will still be struggling with an economic disaster and a disastrous pandemic. We will need a recovery for all that includes the items listed above and goes beyond them.

There will be a new power equation in Washington, and new energy and motion across the country. DSA can build or join broad coalitions for A People’s Recovery on various fronts. We can also coordinate with newly empowered friends (and comrades) in Congress, state assemblies, and city councils

For example, Jamaal Bowman, who won in New York’s 16th congressional district, is already working closely with Alexandria Ocasio-Cortez on housing issues and tenants’ rights. He has launched a battle for prisoners’ rights. In New York State, the DSA slate in the state senate and assembly promises a major fight for a state-level Green New Deal, supported by a massive street-level campaign.

These struggles will build on the historic protests following George Floyd’s murder at the hands of police in Minneapolis, but they cannot focus solely on defunding and abolishing the police. They must morph into broader struggles on all the issues. We can see the beginnings of this widened focus in increased strike activity, including local wildcats and stoppages, and in the tenant struggles and rent strikes that are intensifying everywhere. DSA’s National Political Committee has developed a strategy document with suggestions for actions that chapters can take prior to and after the election.

The tenant fight reflects the looming real estate credit crisis, which will lead to bank crises. The strange and illusory behavior of the ever-rising stock market shows that the trillions of dollars that the Federal Reserve pumped into the corporations had nowhere to go in the real economy. Thus, the investor class dumped funds onto the stock market, creating a bubble that is sure to pop. There is no “V-shaped recovery” on the horizon. Rather, we’re looking at a  meltdown of the U.S. economy on the scale of the Great Depression of the 1930s. Capitalism is failing badly, and ordinary people – the working class – are facing tremendous  threats that call for large-scale resistance and fightback.

There is, of course, a negative scenario – that Trump may hold on to power through voter suppression and other tactics and try to squelch the popular movement and impose  a fascistic crackdown. He is threatening harsh repression and long prison sentences for those who fight him, and is encouraging both police and vigilante violence against protesters. We should answer with a massive street presence and point out that he may well be facing a long and well-deserved prison sentence.

DSA has emerged as a key factor, not only in the battle against Trump, but alongside Black Lives Matter, the Sunrise Movement, and other allies in a more fundamental struggle. Keeanga-Yamahtta Taylor says that “when Black people get free, everyone gets free, [but] Black people in America cannot ‘get free’ alone… Black liberation is bound up with the project of human liberation and social transformation.” We need to organize and mobilize the whole working class.

We live in unprecedented times, and the transition to a just society will not happen on November 4 or in the months following. There is enormous potential. We can’t afford to waste it or relax no matter who is elected on November 3.