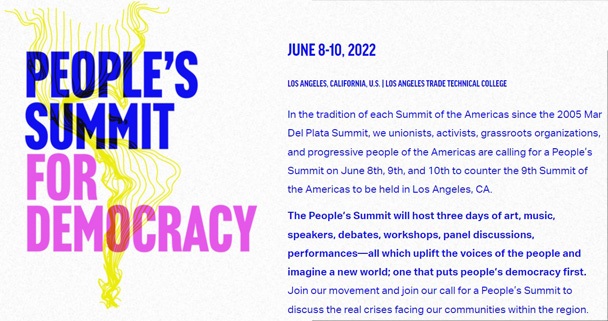 The US scrambles to avoid embarrassment at June 6-10 Summit for the Americas in Los Angeles.
A rival People’s Summit for Democracy, same time and place, has support from 200+ local, national and international groups.

While the US State Department scrambles to avoid embarrassment at the upcoming week-long Summit for the Americas in Los Angeles, a rival People’s Summit for Democracy slated for the same time and place has gathered support from more than 200 local, national and international groups.

Mexican president Andres Manuel Lopez Obrador (AMLO) asked at a May 28 press conference, “Is it going to be the Summit of the Americas or the Summit of the Friends of America? Because if those countries [Venezuela, Cuba and Nicaragua] are excluded, what continent are they from? Are they not from the Americas?” Mexico’s boycott initiative has drawn support from numerous other countries across the region.

“It’s a complete disaster and embarrassment for the US,” said Claudia De La Cruz of the People’s Forum in New York, a main organizer of the People’s Summit. She was speaking on New York radio WBAI’s Covert Action Bulletin program. “Biden has convened this summit to portray Los Angeles and the US as examples of a sustainable future… a space to set the agenda for the region based on the interests of the US – and to avoid any type of opposition,” she observed.

“People aren’t buying the lie that the US is a place of democracy and milk and honey,” De La Cruz said. “I don’t imagine they’ll show Skid Row or the reality of homelessness; just the LA of the elite. AMLO says unless there is the inclusion of all you won’t have most of us there.

“It’s very telling of the moment we are in historically and politically, not only in the region but across the globe in terms of seeking a multipolar world, a world that is not completely dominated by the USA,” De La Cruz said. “People and nations do not want to be ruled over. They don’t want to be told what to do. Countries are affirming that they have the right to develop their processes as their people need and desire. Having Mexico take that position – not just in support of Cuba, Venezuela and Nicaragua, but in support of sovereignty – it’s a language the rest of the region understands but the US doesn’t seem to.”

“When will the U.S. stop lying to itself about global politics?” asked CUNY Professor Peter Beinart, writing in the New York Times last January 13. “The United States has exercised a sphere of influence in its own hemisphere for almost 200 years, since President James Monroe declared that the United States ‘should consider any attempt’ by foreign powers ‘to extend their system to any portion of this hemisphere as dangerous to our peace and safety’.”

This may explain Blinken’s intense concern with China’s rise across the globe, including Latin America. As Vijay Prashad wrote in February, “there is now a changed context across the region, namely a more engaged China. China’s interest in expanding the Belt and Road Initiative (BRI) across Latin America has provided new sources of investment and financing for development in the region. It is widely accepted in Latin America that the BRI project is an antidote to Washington’s largely discredited IMF project and agenda of neoliberal austerity. With little original capital to invest in Latin America, the United States has mainly its military and diplomatic power to use against the arrival of Chinese investment.” This makes it harder for the US to force austerity on the people of Latin America. China now has more trading and investment with Latin America than the US.

Bolivarian Alliance Summit in Havana May 27, and Colombian elections May 29

On May 27 Cuba hosted ten member countries of the Bolivarian Alliance for the Peoples of Our America-People’s Trade Agreement (ALBA-TCP) at their 21st Summit, just days before the US-sponsored Summit of the Americas. The Bolivarian Alliance includes Venezuela, Nicaragua, Bolivia and Cuba, in addition to Caricom countries Dominica, Grenada, Saint Kitts and Nevis, Saint Vincent and the Grenadines, Saint Lucia, Antigua and Barbuda. The conference participants thanked “the brotherly peoples of our continent, which have rejected, overwhelmingly and in different ways, the exclusions from the meeting of Los Angeles.” They also denounced “the coercive unilateral measures [sanctions] against Venezuela and Nicaragua, and the economic, commercial and financial blockade against Cuba,” in violation of the UN Charter and International Law.

The ALBA-TCP conference was a signal, and example, of the emerging power of alternative vehicles of “genuine regional integration, such as the Community of Latin American and Caribbean States (CELAC).” It highlighted the 33 nation-members of CELAC proclaiming Latin America and the Caribbean as a Zone of Peace in January 2014 ‒ not to intervene in other countries’ internal affairs and resolve disputes peacefully. It also denounced the “pretensions of imperialist domination over the peoples of Latin America and the Caribbean to maintain the region divided according to their hegemonic interests.”

Meanwhile in Colombia, presidential elections on May 29 provided a glimmer of hope for progressives and a resounding defeat for the main US rightwing allies in Latin America. Leftist candidates Gustavo Petro and Francia Marquez, the “Historic Pact” slate,” won just over 40% of the vote, well ahead of far-right candidate Rodolfo Hernandez with 28% and oficialista Federico Gutierrez with 24%. That’s a total of 52% for the rightists going into the second round on June 19.

Just over 50% of eligible voters turned out, and Petro-Marquez got about half the youth vote. So the follow-up campaigns for the runoff promise to be intense, not least because of “keen” US interest in the outcome, as well as a possible popular surge mobilizing for the runoff. Both Petro and Martinez survived assassination attempts while campaigning. Another former member of the M19 guerrilla group running for president was killed in 1990. Daniel Quintero, Mayor of Medellin, Colombia’s second-largest city, declared “we are one step away from a coup.” Quintero initiated a “democratic resistance” to the Colombian Attorney General’s decision to suspend him from office for campaigning in favor of the Petro-Marquez slate.

The US National Lawyers Guild issued a statement May 28, saying “we understand the complicity the US has played in funneling money into the Colombian security apparatus from counterinsurgency training in the 1950s onwards, Plan Colombia, the War on Drugs, and using Colombia as a forward operating base in Latin America.” In May US Secretary of State Blinken applauded the democratic credentials of outgoing Colombian president Iván Duque: “We have no better ally on the full range of issues that our democracies face in this hemisphere,” Blinken said, while Duque’s government stands accused of targeting protesters and allowing an unprecedented number of assassinations of Indigenous, Black, and peasant leaders to take place under his watch.

Colombia is just one example. The US, especially the CIA, has teamed up with local oligarchies to suppress democratic initiatives across the continent: an attempted coup against Venezuela’s Hugo Chávez in 2002, and against his successor Maduro in 2020; successful coups in Haiti in 2004 and Honduras in 2009; “lawfare” (fake legal scandals) leading to impeachments in Paraguay in 2012 and Brazil in 2016; a “self-coup” in Ecuador by President Lenin Moreno in 2017; and a temporarily successful coup against Bolivia’s President Evo Morales in 2019. It’s a pattern dating from the 1960s.

Getting out from under the boot of imperialism

Claudia De La Cruz commented that “Latin American states, whether they’re socialist, progressive or not, understand that living under the boot of imperialism is not beneficial and that there are other avenues to develop as nations. That’s huge in our region. And the fact that there are more and more nation-states developing relations with China is also very important. It talks to the geopolitics and geostrategy globally. The US has lost a lot of legitimacy and allies… It manifests a moment of transition that we’re in not only in the region but globally where the US is no longer able to determine the nature of its relationships with the rest of the world, where people are standing up and saying we actually have things you’re interested in and we’re not willing to just give it. The Latin American people and states are saying we can’t take this anymore, we’re not going to hold on while you put your boots on our necks. That’s really hopeful!”

About the People’s Summit, De La Cruz said “we’re excited to be part of 150-plus organizations coming together from across the US and 200-plus from across the continent –working class communities of unionists, students and families in struggle who have organized against the Summit of the Americas and represent what it means to build popular democracy and people’s power outside the neoliberal projects and the capitalist agenda that has been imposed in the region and in the US.”

The People’s Summit will bring together organizations, artist collectives, cultural workers, educators, and activists into LA June 8-10. There will be panels, workshops, and plenaries on popular democracy and sovereignty; conversations about the Latin American region and what’s happening in USA ‒ the state of struggle over homelessness and housing, health care, against police brutality, and the militarization of our streets. De La Cruz said “I think it’s particularly important for us to be able to come together after three years organizing in a very limited way in our communities. We did see the rebellions that took place in 2020… So coming together and conversing with each other – engaging in debate, thinking about community strategies we could advance. What happens after the summit is the most important piece. What happens there is going be joyful, to hold each other, to be in conversation each other, hear our stories. We’re very excited about the march happening on June 10, labor organizers leading folks in different community organizations… We hope folks connect and exchange, share, debate, plan for the future.”

De La Cruz said there will be a broad spectrum of people from Latin America. “Folks are interested to learn about the USA; they hear about ‘how much democracy there is,’ but they don’t hear about the struggle, how people are hurting and fighting back; everything that happens in the US impacts the rest of the world; what the people, their majority, are doing, to be able to counteract what the capitalist government of the US is doing internally and externally and for them to be in conversation with organizers, educators, with people engaged in struggle. It will be a huge contribution to movements in the rest of the region.”

For more info, go to peoplessummit2022.org.