Sanctions: A Wrecking Ball for a Global Economy 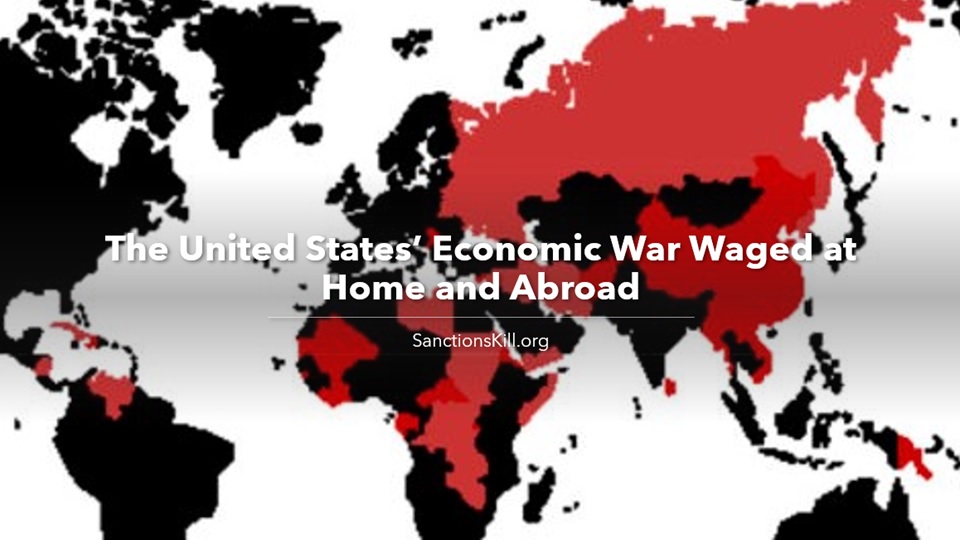 Don’t miss this SUPER IMPORTANT Webinar! (See my review below this announcement.)

Sanctions: A Wrecking Ball in a Global Economy

An Anthology by Social Justice Activists; a project of the Sanctions Kill Campaign

The Sanctions the US government imposes on other countries are often called “a substitute for war,” or “just short of war.” That’s not true. They’re war – a key element in the “hybrid war” waged against most of Eurasia, much of Africa, and part of Latin America. Joe Biden says he doesn’t want World War III, but look again. Regime change war through sanctions is ongoing now, against Russia, China, Cuba, Venezuela, Nicaragua, Zimbabwe, and more than three dozen countries, who together make up about a third of the world population.

US sanctions on these countries are indeed a “wrecking ball,” as this crucially important anthology demonstrates well. But they’re also a boomerang that is devastating Europe, and rapidly surging into the lives of people at home. High prices for gasoline, food and other necessities are the tip of an iceberg, or the headwinds of a hurricane. Much worse is headed our way. We need this book to understand what’s coming and get ready. We need the explanations and background, to really understand what’s happening, and we need the “Sanctions Kill Toolkit” – with its excellent script and full-color slides – to spread the word.

As the slideshow says, US-imposed sanctions are basically economic warfare, used to strangle countries that don’t kowtow to US dictates. They devastate economies by cutting off access to credit and trade, investment, and much more. That may sound like the sanctions are aimed mainly at governments and businesses in target countries. But they strangle people, too – crippling food production and distribution, cutting off medicine and medical supplies, energy and transportation.

The US embargo of Cuba is a good example. Imposed in 1962 following the revolution that brought Fidel Castro to power, the embargo is designed to isolate Cuba, and “make its economy scream,” so the people there might rise up and overthrow their government. The United States not only bars trade or financial transactions by US companies but also punishes other countries and companies that trade with Cuba. Cubans are famous for keeping classic 1950s American cars running. That’s a tribute to Cuban ingenuity, but it doesn’t change the fact that over six decades the economic blockade has deprived Cuba of nearly a trillion dollars. That’s conservative, of course, since the damage to people’s lives is incalculable.

Economic sanctions can be more effective than bombs at destroying a country’s basic infrastructure – electrical grids, water treatment and distribution systems, transportation hubs, and communication networks – by blocking access to fuel, raw materials, and replacement parts. This causes droughts, famines, disease, and poverty, resulting in the death of millions.

The UN General Assembly voted this year 185 to 2 against the US embargo of Cuba, as it has repeatedly each year for several decades. The US and Israel provide the “No” votes and ignore the votes of the majority. This highlights another point: Sanctions are illegal: they violate the UN Charter, the Fourth Geneva Convention and the Genocide Convention, the Nuremberg Charter, the WHO Constitution, the Universal Declaration of Human Rights… and the Supremacy Clause of the US Constitution, which says treaty law is the law of the land. The US has approved all these charters and conventions as treaties.

Ajamu Baraka of the Black Agenda Report highlights Nicaragua, the second poorest nation in the Americas, where universal healthcare and education are guaranteed to the population as a human right, unlike in the US. Congress has passed not one but two acts of anti-Nicaragua sanctions: the NICA and RENACER Acts. Together they’re designed to strangle and isolate Nicaragua despite the fact it’s recognized as the safest country in Central America, and even though it’s poor it has the best land reform in the region and is nearly self-sufficient in food.

Baraka asks: Why do Nicaragua, Cuba and Venezuela pose such an existential threat to the US? Why are they able to unite both major US political parties against them? He cites two factors. First, the power of their example in attempting to build independent, self-determining projects that center the material needs and interests of the people over those of capital. Second, the US policy of “full spectrum dominance,” that is, no variance from its hegemonic rule.

The same is true for Zimbabwe, a landlocked country just north of South Africa, which instituted a land reform program that took back property seized by British colonists centuries ago. Zimbabwe’s crime was violating the human rights of the colonizers. Zimbabweans won their independence in 1980, but over 80 percent of the arable land was still held by settlers who were less than five percent of the population. The government of Robert Mugabe returned most of it to Zimbabweans who had fought for it. The US responded by designating Zimbabwe as “a threat to national security,” and has used sanctions to strangle it.

Haiti is also targeted for punishment. Its crime might be that its people finally elected a democratic leader, Jean-Bertrand Aristide, instead of the dictators and puppets the US had imposed on them for decades. It wasn’t enough for the US to merely kidnap Aristide in 2004 to get him out of power. The Haitian people have continued to protest and rebel against the starvation policies and dictatorial rulers imposed on them by the US. The US uses sanctions as part of its toolkit of permanent control. But there’s another side to the story. While we often hear “Haiti is the poorest country in the hemisphere,” it is also “the most exploited manufacturing hub in the Americas,” and is being touted as the “manufacturing Taiwan of the Caribbean,” according to Tamanisha John of Black Agenda Report. Notably, the report says US corporations use Taiwan to supply military and security gear to Haiti to suppress protests. Now the Biden administration is calling for yet another intervention of foreign troops for Haiti “to alleviate the humanitarian crisis” there. As of early December, Counterpunch reported the UN Security Council had not approved the proposal, due to concerns voiced by the governments of Russia and China. On the ground in Haiti, there have been major demonstrations against new intervention of foreign troops. The best would be for the “Core Group” of the US, France and Canada to pay reparations and then take their knees off Haiti’s neck.

Using Russia to hit ‘an awful lot of countries’

When announcing sanctions against Russia, President Joe Biden said in Brussels March 24 at a NATO press conference: “The price of the sanctions is not just imposed upon Russia. It’s imposed upon an awful lot of countries as well, including European countries and our country as well.” We should remember this. As Sara Flounders writes in the book’s introduction, “The US-NATO sanctions against Russia are creating unprecedented inflation – the highest in 40 years – supply chain chaos and sharply higher costs of energy for industries, transport and homes.”

Flounders adds: “Washington is demanding that countries act against their own economic interests and enforce sanctions… in which they had no voice or prior notice.”

How could Biden get the EU and NATO partners to go along? He issued an ultimatum: “You have two options. Start a Third World War; go to war with Russia, physically. Or, two, make sure the country… ends up paying a price.” Biden said: “I know these sanctions are the broadest sanctions in history,” but he added in an interview that his “goal from the very beginning” was the keep NATO and the EU “on the same page.” (Fox News, Feb. 26) So in essence, Flounders writes, “the US, through its command of NATO, is holding all of Europe hostage in order to reestablish its economic dominance and expand its military might on the continent.”

Can it work, or is Biden going too far, and can he really keep the US NATO allies “on the same page”? So far, it’s the western European economies that are suffering a major crisis with industries shutting down and people freezing in their homes for lack of energy. Crushing inflation is threatening to bring on a major recession. Meanwhile the freezing – and outright theft – of hundreds of billions of Russian assets, and cutting it off from SWIFT and western banks, has caused Russia to forge new and better economic ties with its major Asian partners, China and India. “Russia is self-sufficient in grains, meats, other proteins and in energy,” Flounders writes. “Its trade with China, India, Brazil and Iran ensures its industry will not collapse for lack of spare parts.”

The Boomerang, and Resistance in the Global South

This is the sanctions’ boomerang. While the “European countries and our country as well” (as Biden said) are facing high inflation and economic crisis, other countries are cutting loose from the grip of the US dollar. As Brazil’s Lula said, even before he won the presidency in October, “to be freed of the dollar… we are going to create a currency in Latin America, because we can’t keep depending on the dollar.” (popularresistance.org, May 6) Meanwhile Russia is selling gas, oil, and fertilizer for rubles, rupees and Chinese renminbi. Both Iran and Saudi Arabia are joining in this trade, and both have applied for membership in the BRICS trading alliance, which is set to expand dramatically. As this happens, the US stranglehold on the world economy will gradually be loosened or broken.

China can be considered the key to success in resisting US and EU sanctions. Despite intense and constant economic warfare against it from the US – including a blizzard of sanctions –  China has fortified itself and largely defeated the sanctions, by beating the US in the trade game. Now the vast majority of countries in the world trade more with China than the US. And through the Belt and Road Initiative, BRICS, and the Shanghai Cooperation Organization, China has shielded itself – and most of its trading partners – from the US dollar stranglehold. While it is still a developing country, China runs its own economy. Health care, education, and the general well-being of Chinese people don’t depend on the whims of the US, the World Bank and International Monetary Fund. And China can now help other countries.

China’s message is “Developing countries should jointly fight the consequences of Western sanctions against Russia,” said the Chinese publication Global Times on May 6. “Developing countries, including China, India, Indonesia, Brazil and others that have refused to take sides over Western sanctions against Russia, need to consider ways to strengthen their economic coordination to weather the consequent shocks brought about by the West.”

This is the beginning of the end for the US sanctions regime, which is indeed a wrecking ball on the world economy.

Webinars and public (in-person) meetings are scheduled throughout December to launch Sanctions: A Wrecking Ball in a Global Economy. Find out more at info@sanctionskill.org.