Turn the Guns Around! 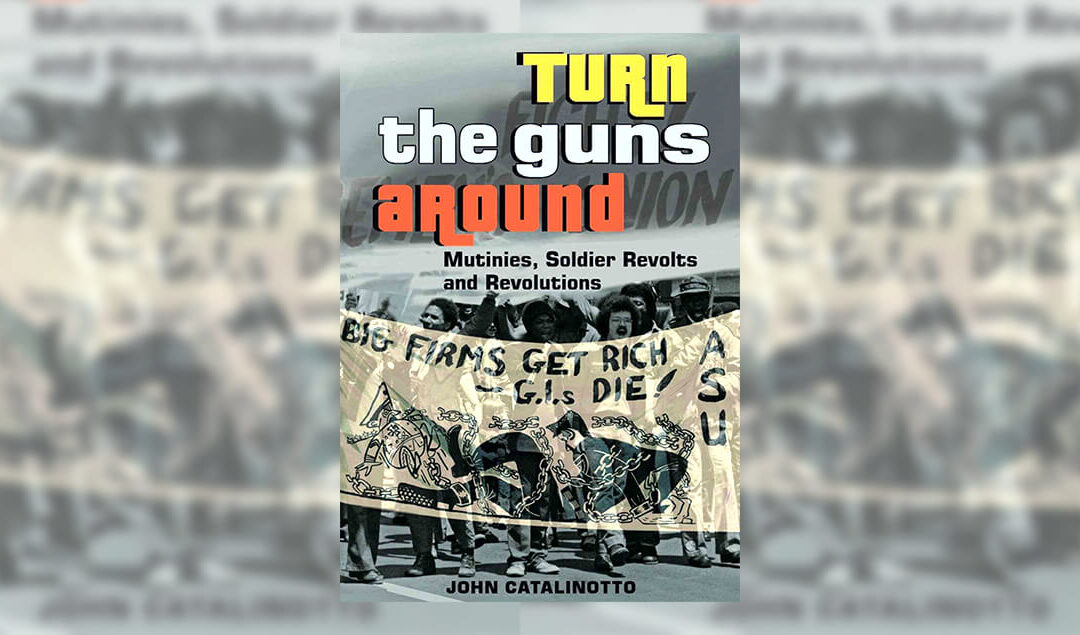 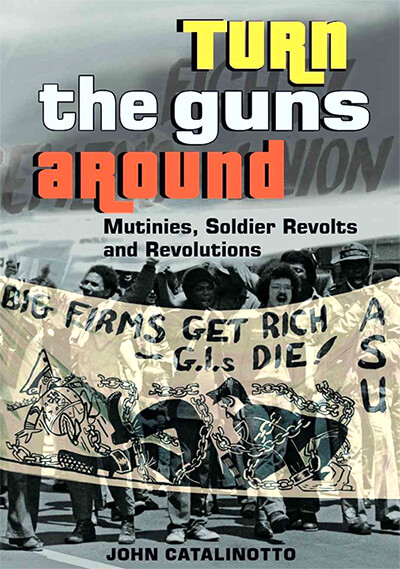 Turn the Guns Around: Mutinies, Soldier Revolts and Revolutions,?by my friend John Catalinotto, an organizer of the American Servicemen’s Union (ASU). I’ll post my review (below) of this hugely important book, and am likely to refer to it from time to time. In some ways I consider it the most important of numerous important books about the resistance of U.S. soldiers in the wars of the past 50 years.

?Turn the Guns Around?: not just a memoir, but a living legacy

?Turn the Guns Around? is an inspiring memoir of the anti-war GI union that became a major factor in stopping the U.S. war against Vietnam nearly two generations ago. But it?s far more than a memoir ? it is really an impassioned guidebook for revolutionaries with the courage to organize inside the armed forces, or to be part of their support system.

As the relentless Vietnamese People?s War for national liberation successfully resisted everything the U.S. imperialist military machine could do to stop them, the American Servicemen?s Union (ASU) provided a means for the GIs to fight their real enemy ? the Brass ? rather than the Vietnamese. In the process the ASU brought a key sector of the U.S. working class into the epochal struggles of that amazing time. The ASU story is an example to emulate as new pre-revolutionary situations arise in the near future.

Catalinotto makes a rock-solid historical case: he details how anti-war soldiers were the critical success factor in the Russian revolution of 1917, in the Portuguese captains? revolution of 1974, and in the Paris Commune of 1871. In each case it dawned on the soldiers that their own commanders and political leadership were their main problem, and when they literally turned the guns around on their true enemy, they succeeded in making peace and transforming society.

The visionary messages to imperialist troops from their supposed ?enemies? ? the Vietnamese liberation forces for U.S. GIs, and the African revolutionary leaders in the case of Portuguese soldiers, make for inspirational reading. So we are introduced to the legendary Amilcar Cabral of Guinea, whose death did not come soon enough for the Portuguese rulers and their U.S. backers, but who is mourned to this day by all defenders of African liberation.

Close-up sketches of the way Russian Soviets of Workers,? Peasants? and Soldiers? Deputies brought tens of thousands of armed soldiers and sailors over to the revolutionary side make the key point: state power is largely the power of the armed forces, and when that armed power goes over to the side of the workers and peasants, the revolution is essentially won. Orders from commanders without troops become empty. Political leaders dependent on military power suddenly have no power. The book even includes the story of how Lenin, the leader of the Russian revolution convinced his own dubious comrades that ?yes we can? overthrow capitalism if the soldiers and sailors join with the workers. And it includes brief excerpts from Lenin?s famous State and Revolution that provide the essential theoretical underpinning.

Of course this guidebook does not claim the task is easy or risk-free. It is crammed with tales of individual bravery and reckless heroism: soldiers defying their commanders both in combat situations and inside military stockades, where only their fearless defiance and solidarity from outside the walls could change the power equation. The temper of the times was also a key factor: the massive civilian anti-war movement and the raging rebellions in Black ghettoes in cities across the country combined to inspire defiance and reckless courage in troops who had already become ?fed up? from their horrifying combat experience in Vietnam.

The heroism of the leaders and organizers of the American Servicemen?s Union (ASU) was forged by their determination to stop the horrors of war and racism that defined the time. The story of how ASU founder Andy Stapp decided consciously to enter the Army to foment anti-war rebellion remains as inspiring today as it was then. His courage and brilliance won him the confidence of his fellow GIs and the determined hatred of the Brass. It also won the support of revolutionaries in Workers World Party, who helped him forge the ASU and mobilize the political and legal talent to overcome the military ?justice? system that tried to put him and his followers away forever.

Much of the story involves battles to get rebellious soldiers out of prison or prevent them from being locked away. Some of it seems miraculous, especially in hindsight ? like the 38 soldiers in the Fort Dix, NJ, stockade who successfully avoided long prison sentences after a rebellion that left the stockade in flames. Or the Fort Hood 43 ? Black GIs who refused to be deployed for anti-riot duty at the Chicago Democratic Convention in 1968, mere months after the assassination of the Reverend Dr. Martin Luther King had sparked massive rebellions in Black ghettoes across the country. The miraculous character of the people?s movement of that time made the difference. For example, the GI coffee houses that sprang up near military bases became key centers of support and collaboration for the ASU.

The miracle of civilian-GI and Black-white solidarity shows in the sanctuary struggle in Honolulu in August 1969. The Church of the Crossroads there had made a commitment of sanctuary for GIs who refused to be part of the war machine. When a few GIs accepted the offer, ASU organizers joined the effort as it mushroomed with dozens more GIs coming in, bursting the seams of the Crossroads church but winning support from other nearby churches.

Catalinotto relates how the ASU took it a step further, mobilizing support for Black Marines at a nearby base who were rebelling against racist treatment. Following that mobilization, some of the Marines responded with solid support for the sanctuary, providing food from their own mess hall for the GIs at the sanctuary. ?After that happened,? Catalinotto writes, ?I started to believe we could take down the military and help the Vietnamese get the U.S. out.?

The impact of the Women?s Liberation movement on the U.S. war machine, and on the GI resistance itself is related by ASU organizer Joyce Chediac, who together with other women friends or wives of GIs became effective mobilizers of defense and support. In the process they successfully changed the consciousness of the mainly male GIs, winning respect for women?s rights and dignity, fighting effectively against the core sexism of military training, and updating the ASU program to oppose sexism and respect women?s dignity inside and outside the military.

As ASU members left active duty, some turned to the struggle of veterans for better benefits, jobs and health care. The book relates the vets? explosive disruption of job fairs in New York and Chicago led by ASU organizers, and an April 1973 veterans? protest in Washington, DC, demanding ?$2500 or FIGHT!? These later struggles suggest that a re-constituted American Service People?s Union could once again become an organizing center for people currently in the U.S. armed forces as well as veterans. They number in the millions and have innumerable grievances. And the legacy of the ASU makes it very clear they could have tremendous impact.

The example of the ASU is urgently relevant to the situation today. A proto-fascist presidential candidate bragged over and over in 2016 how military deserters used to be dealt with: ?Bang. Twenty years ago it was bang.? Math and history were never great subjects for this candidate. The level of military resistance in the mid-90s and later during the U.S. wars for Iraq?s oil was not the same as it was between 1965 and ?75. But the heritage of heroic GI resistance of the Vietnam era did in fact inspire significant resistance in these later wars. And it is sure to continue to do so. Whatever the current commander-in-chief may want to believe, he and we are sure to find the legacy of the ASU to be more than merely a memory.