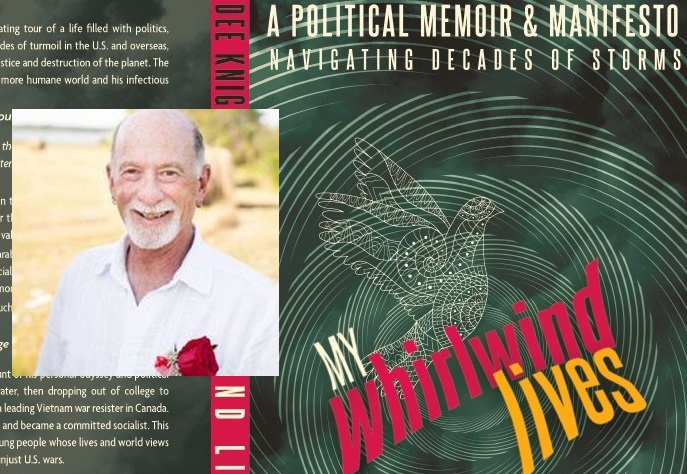 By Richard Lemm
Dee Knight’s “political memoir and manifesto” My Whirlwind Lives, with a central focus on the long struggle to win universal amnesty for Vietnam era draft dodgers and military deserters, has several outstanding virtues. First, it is a valuable history of the American and Canadian anti-war movement in the 1960s-1980s through the lens of a key worker in the amnesty movement.
Second, My Whirlwind Lives is an absorbing account of how a benignly conservative young man from eastern Oregon was radicalized in the 1960s while a student at San Francisco State College, and by the Vietnam War and anti-war opposition, by racial oppression and the civil rights movement, and by socio-economic inequality and the social justice movement. After Knight moved to Toronto as a draft dodger, his life-work as an anti-war activist expanded, and merged with his newfound activism on behalf of racial, social, and economic justice.
Although Knight regarded his Canadian experience with gratitude and respect, he was politically and ethically compelled to return to America, to New York City where he has since lived, as an activist in a center of late-capitalist, militarist, and neo-imperialist power.
Thus, his memoir is also a vital analysis of that power and its consequences: its 20th century history and its 21st century reality. His remedy is a radical transformation to socialism. Readers drawn to this book will find it hard to quarrel with his assessments of problems, for instance: historical racism and its resurgence; the outlandish, ever-growing, and unquestioned American defense budget. Some readers may take issue with aspects of his solutions, but his paths for an ameliorated future are always well-reasoned and preferable to the current roads we are on. Indeed, Knight’s twining of anti-war and anti-imperialist arguments with racial, economic, and social justice stances parallels the way other activist writers such as Naomi Klein and Arundhati Roy combine environmental analysis and vision with critiques of “growth”-driven aka rapacious capitalism and with socio-economic justice and human rights issues.
As a person whose forms of “activism” have been as a writer and educator, I am grateful for and admire front-line activists such as Knight. As his memoir engagingly makes clear, his kinds of activism certainly require intellectual acumen and rigour, a great amount and variety of writing, and plenty of educating – the latter a constant two-way flow of learning. But there is also the daily grind of organizing, building contacts, fundraising, working with media, and negotiating differences among activist groups. All that unglamorous labour behind the occasional headlines. All those devoted workers behind the handful of lime-lighted heroes who, themselves, toiled anonymously until they arrived in the public’s and the power elite’s eyes. Knight’s memoir brings that work and those people to vivid life, too.